Protecting the liver, kidneys and bladder from free radical damage

Antioxidants have a way of helping your dog’s body to cope with the terrible environmental pollution that surrounds them. In addition to the antioxidants their bodies produce, nature provides them with hundreds of antioxidants (phytochemicals) in the foods they eat. Phytochemicals are naturally occurring compounds such as: enzymes, pigments, and hormones that plants create for their own protection and survival. They give plants their color, odor, and taste. Some, like beta-carotene, are well known, but 90 percent of phytochemicals are still unidentified. Beta-carotene is the carotenoid that gives carrots their orange color, but there may be as many as 600 different carotenoids in foods.

Your dog’s daily consumption of fruits and vegetables provide them with much of the beneficial phytochemicals and antioxidants. However, because we do not know the quality of the soils from which our commercial or organic fruits and vegetables are grown, we cannot guarantee that our dogs are totally protected from free radical damage. This is why it is so important to supplement their diet with antioxidant enzymes and vitamins. 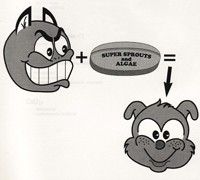 Vitamin C and other antioxidants such as vitamin E, A , and D may be able to prevent environmental damage from the activity of free radicals. Antioxidants help with proper essential fatty acid metabolism. Antioxidants beta carotene, and vitamins C and E are very important to protect the digestive system from free radical damage (Hudson, p.148).

Why whole foods are the best antioxidant supplements:

The antioxidant nutrients (such as vitamins A , C and E) are derived from the diet and have their primary effect while circulating in the blood outside of the cells. The antioxidant enzyme system (super oxide dismutase "SOD", catalase and others found naturally in foods) is produced by the body inside and outside of the cells. This gives the antioxidant enzyme system a much greater advantage in controlling free radicals because free radical production occurs primarily inside the cell.

One of the best antioxidants on the market today is a supplement made from organically grown wheat sprouts, wild-crafted microalgae and red sea algae. Three powerful foods are in this one supplement. This supplement is a whole-food full spectrum antioxidant.

The wheat sprouts, wild-crafted microalgae and red sea algae wholefood antioxidant supplement is the most effective first-line-of-defense against free radicals. It supplies the digestive system with antioxidant nutrients AND natural enzymes. The effectiveness of this product has been proven through 10 years of animal studies at Indiana State University and Wilkes University (Email us if you would like a copy of this research - please put requested article in the subject line).

Kale Sprouts. Kale is a green cruciferous vegetable with numerous benefits and rich in antioxidants and vitamin K. When sprouted, kale also has high levels of available minerals and vitamins, lutein and zeaxanthin compounds, carotenoids and flavonoids.
Red Clover Sprouts. Red clover is a perennial plant found throughout Europe, Asia, and North America. Red clover sprouts are rich in protein, vitamins, minerals, phytonutrients, enzymes, and antioxidants.
Wheat Sprouts are the germinated grain of the wheat plant and are a good source of fiber and protein. They are high in a variety of essential minerals, amino acids, omega-3 and omega-6 fatty acids. Wheat sprouts have high amounts of active enzymes, enhanced vitamin content, and increase digestibility. They also contain high amounts of the powerful antioxidant superoxide dismutase (SOD). Wheat sprouts offer all of the goodness of whole grains but in a more easily digestible form.
Dunaliella Salina is a sea microalgae with high carotenoid content (beta-carotene, alpha-carotene, zeaxanthin, lutein), antioxidants, and important vitamins. It contains a high concentration of long-chain polyunsaturated fatty acids and a broad spectrum of readily assimilated minerals.
Organic Microalgae is rich in phytonutrients, plant-based proteins, minerals, and essential fatty acids, as well as a wide spectrum of micronutrients, making it a profoundly nourishing food that provides a broad range of benefits.
Other Antioxidants to consider in your dog’s nutritional supplementation program:

Coenzyme Q10 (CoQ10) Blend. In any liver and digestive healing process CoQ10 is an essential supplement because it assists the liver and digestive tract cells in converting nutrients into energy. This antioxidant supplement has the ability to manipulate oxygen. It can add or take away oxygen for a given biochemical combination, moving oxygen into or out of the mitochondria. It can actually increase oxygen levels when necessary, and reduce them if they threaten to reach toxic levels. This is part of its role as an antioxidant.

The best CoQ10 supplements blend synergistic ingredients:
Ubiquinol is the active converted form of Co-Q10, an enzyme found in every cell of the human body. Required for 95 percent of our cellular energy production, ubiquinol is an essential nutrient for the body, with promising research on its potential benefits to cardiovascular health.*
Olive Polyphenols (Hidrox®). Hidrox® is the brand name of a uniquely high-quality blend of polyphenols derived from the pressed juice of organically grown olives (Olea europaea). The antioxidant polyphenols in Hidrox® include hydroxytyrosol, which has over fifteen years of research documenting its many benefits.
Reishi. High in polysaccharides, beta glucan and more than 130 triterpenoid compounds, Reishi is the most extensively researched mushroom on the market.
Oyster Mushroom. Rich in beta glucans, B vitamins, protein, minerals, polysaccharides, and the antioxidant ergothioneine, Oyster mushrooms are prized by wild foods foragers for their delicious culinary flavor and rich nutritional content.
Organic Microalgae is rich in phytonutrients, plant-based proteins, minerals, and essential fatty acids, as well as a wide spectrum of micronutrients, making it a profoundly nourishing food that provides a broad range of benefits.

Premium Colorful Algae Blend
Freshwater and ocean algae have long been a global dietary staple in traditional cultures for their broad spectrum nutrition health benefits. Current scientific research is centered on: Nine colorful algae combining to bring a unique richness of minerals and phytonutrients from the lake and sea to the body:
Dulse is a dark red sea algae that is rich in phytonutrients and pigments. High in plant-based protein, it contains important vitamins and minerals, including vitamins B6, B12, and A, iron, calcium, potassium, phosphorus, and manganese. Dulse is also a well-known snack food in coastal regions around the world.
Ecklonia Cava is an edible seaweed recognized as a rich source of bioactive derivatives, mainly phlorotannins, including triphlorethol-A. These phlorotannins exhibit various beneficial biological activities and are strong antioxidants.
Fucoidan is one of the more broadly recognized and studied seaweed compounds in the world. Derived from brown sea algae, fucoidan is a sulfated polysaccharide.
Kelp is a wild algae that occurs naturally in all the oceans of the earth and is a rich source of micronutrients and minerals. Widely consumed in Asia, it contains ample levels of vitamins C and E along with a rich array of minerals, such as calcium, magnesium, boron, and trace elements that are necessary for strong bones and muscle function.
Bladderwrack is a brown algae found in the northern Atlantic and Pacific oceans. It is rich in vitamins and minerals and contains fucoidan, a sulfated polysaccharide that is being broadly studied by the scientific community worldwide.
Dunaliella Salina is a sea microalgae with high carotenoid content (beta-carotene, alpha-carotene, zeaxanthin, lutein), antioxidants, and important vitamins.
Spirulina (Arthrospira platensis), a type of bluegreen microalgae, is rich in chlorophyll, phycocyanin, a broad spectrum of minerals and phytonutrients, and vitamins A and K, and provides a complete protein profile. Grown through freshwater aquaculture, spirulina is a complete whole food.
Chlorella is a strain of green microalgae also grown through freshwater aquaculture. Rich in nucleic acids, amino acids, peptides, polysaccharides, and minerals, chlorella offers another variety of nutrient-dense whole food with its own unique nutritional profile.
Organic Microlgae. Our own wild bluegreen is the only edible freshwater bluegreen algae in the world that grows abundantly in the wild, and is considered one of the most nutrient-dense foods on earth.

Nutrient Rich Mushroom Blend
Throughout recorded history all civilizations have prized certain mushrooms as both food and medicine. Some of the most sought-after and highly researched mushrooms, such as cordyceps, reishi (also called ganoderma), maitake, shiitake, agarikon, Lion’s Mane, and Turkey Tail, are now believed to be among the most powerful and beneficial foods on earth.

Cereboost® (Standardized American Ginseng). Native to eastern North America, American ginseng (Panax quinquefolius) has been harvested and used by Native Americans throughout history for its numerous benefits. With its trademark forked root system, American ginseng has become extremely popular in the past fifty years and is widely cultivated for use in a variety of health-oriented formulas and extracts.
Resveratrol. Found abundantly in the skin of grapes, certain berries, and in the Japanese knotweed (from which it is extracted for commercial nutritional uses), resveratrol is being studied for its potential benefits to many systems in the body.
Lion's Mane. also known as Hericum erinaceus, has been called "nature's nutrient for the neurons" because of an agent found in the mushroom called nerve growth factor (NGF).
Agarikon. A rare polypore or tree-based conk mushroom of notable interest, agarikon is commonly found in the old growth forests of Oregon and Washington, Revered by the ancient Greeks as an "elixir of life", agarikon is prized today among mycologists.
Cordyceps. Rich in proteins, plant sterols, polysaccharides, antioxidants, and nucleoside derivatives as its critical components, cordyceps has a been utilized in extracts and formulas for health benefits throughout history.
Organic Microalgae  is the only edible freshwater bluegreen algae in the world that grows abundantly in the wild, and is considered one of the most nutrient-dense foods on earth.

A summary of the antioxidant supplements you need to protect your dog’s liver:

(It is recommended that you start your dog with one antioxidant at a time).

We will email you a specific schedule to follow as you start giving these supplements to your dog.

Contact us with your questions and/or when you are ready to get started on these powerful supplements.

Other supplements needed for healing your dog’s liver and kidneys - click on each link: