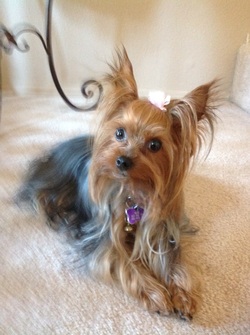 We can't say enough good things about the program that BeBe has been on for the past 10 months.  It has transformed her health.

We found out that BeBe had a suspected liver shunt when she was about 1 1/2 years old.  She was vomiting yellow bile and had loose bowels.  The veterinarian I was going to at the time said "Oh, all puppies vomit."  I thought to myself, this was not necessarily true so I changed to another veterinarian.

The new Vet said that BeBe had a "trick" knee and should have surgery on it.  I also told him about her vomiting and loose bowels and he gave her Science Diet Rx for digestion and said that would help her.  He gave her a blood test and that is when we found out that her bile acid levels were extremely high - over 100 -  when normal range is around 11 to 14.  He immediately wanted to do an ultrasound to determine if his suspicions of a liver shunt existed.  When he performed the ultrasound he said he was about 75 percent sure but not 100 percent sure so didn't charge for that exam and sent us to another Vet who specialized in liver shunts.  Again, after paying over $600.00 he also said he was only about 75 percent sure but still recommended surgery immediately to correct what "they thought looked like a liver shunt but couldn't determine exactly where it was."

We went back to the Vet who performed the first ultrasound and he advised us that he wanted to treat her "conservatively" and put her on Neomyocin and S-Adenysol and dry Hills Science Diet L/D.  She refused to eat the Hills L/D and after doing research found out that it has ground up paper in it so I also refused to give it to her.  I chose a couple of organic dry dog foods to feed BeBe.  Again, 6 mos. later had another test done and her bile acid levels came down a little but her energy levels were very low and she acted like an old dog rather than a 2 yr old dog. 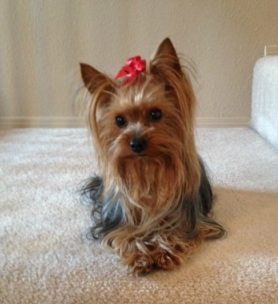 We kept this up for another frustrating year and a half before we found www.doglivershunt.com  After her last test before finding this site, her levels were elevated very high and we knew there had to be a better way.

I was so excited to find the web site and I called Rick and he was so sweet, he listened to my story and said he felt the program of diet and supplementation would help her.  We got specific instructions on what to do and what to expect with each week.  I was apprehensive at first, but being a firm believer in organic food and supplements I was convinced that this approach would help.

They put up with my constant e-mails and several telephone calls and always promptly answered my questions and concerns.  Everything that Rick said would happen with the transition of healthful organic foods and whole food supplements happened exactly as he said.  It takes a lot of commitment, patience and perseverance to continue exactly as instructed but it will pay off.  We now have our "puppy" back even though she just turned 4 years old February 19th.  She is so happy and playful and it makes us feel good to know that finally it has all paid off.  It is important to follow the instructions exactly and don't give any improper food even though it may be tempting.

We are so grateful for finding this web site and what it has done for our precious BeBe.

Click Here to Return to the Testimonials page
The statements in this page have not been evaluated by the Food and Drug Administration. These products are not intended to diagnose, treat, cure or prevent any disease.