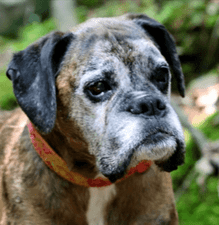 Sometimes dogs come to me with poor liver health due to the conventional treatment being done for some other degenerative health condition.

Medications can be very hard on the liver.  Gatsby had a large brain tumor and was not expected to live very long.  I was able to extend her life for almost two years.   But more importantly, the quality of her life was vastly improved for that time.

I will let Gayle tell you Gatsby's story:

My female, 10 yr. old Boxer, Gatsby, is a miracle thanks to Rick Scheyer and his raw food diet regimen, along proper whole food organic supplements.

Gatsby was exhibiting neurological symptoms and was increasingly becoming lifeless. She was diagnosed by MRI on 12.03.13 with a golf ball sized brain tumor. She was given a "couple of months" to live.  Recommended treatments of chemotherapy were refused, along with some additional aggressive treatments.

Multiple prescribed drugs were started. Often, over the next several months, I was close to putting Gatsby down due to her lack of enjoyment of life.  Finally, there came a point where I realized I was going to kill Gatsby by the use of the traditional medicines, as they were destroying her liver.   Her liver test results were very bad.

I decided to try one last resource...Google.  I don't recall exactly what I searched, but I believe God directed me to www.doglivershunt.com's website. Gatsby did not have a liver shunt, but I continued reviewing the website and the talk of liver damage and pet health and nutrition peaked my interest.

I contacted Rick and advised him of Gatsby's diagnosis, prognosis and her decline. He was very worried it may be too late to turn her around; however, he made some recommendations which we quickly implemented.

I soon became very skeptical as it seemed too good to be true.    My heart sank.  I felt this was all a scheme.

But Gatsby was desperate and had nothing to lose at this point, as she was dying. So I continued on with the recommendations from Rick.  And something slowly started happening.  I was able to wean Gatsby from ALL her medicines, with the exception of her Prednisone, though this has been reduced in half.  She started to have life back in her eyes.  She even became playful again!

Gatsby would go through periods of "detoxification" which at times was ugly.  I was fearful every time she exhibited a new "sign" thinking she was regressing and dying again. With time and encouragement, I came to understand she wasn't dying anymore.  But my initial instinct was to take her to the Vet or put her back on the medicines.  I could not turn back and so I trusted the process, though it was very scary at times. The process is, ironically, the polar opposite of what one would normally do for their beloved pet.  Thank God that Rick was there to help me.

In August of 2015 it will be two (2) years since Gatsby started w/the raw food diet and  supplements.  My family, friends, and Veterinarian (though I rarely see her anymore), are wonderfully amazed at the recovery made.

Please understand, no one is claiming that this regimen and process has cured Gatsby of her brain tumor.  There is no cure for her tumor.  What this regime and process has created is an overall health of her other organs, especially her liver, which now "supports" the brain tumor.  If the other organs are strong and healthy, a weakness (i.e. the brain tumor) can exist.  At some point in time, the tumor may enlarge to her detriment, but I will never regret the course we have taken here. There's no doubt, she would not be alive today, let alone thriving, if i continued w/traditional medicine.

I will leave you w/this....there were many emotional ups and downs on the journey.....i.e. was I doing right by Gatsby by trying this "crazy" regimen vs. modern medicine.  I promise you this "story" is my and Gatsby's truth.

She was showing some minor changes here and there.  Then one day she awoke with a head tilt, ataxia gait and her eyes with rapid movement.

I took her immediately to Penn Vet in Philadelphia.  They did a neurological exam and surmised her brain tumor had either bled (to cause such drastic changes) or it simply grew and was impinging on the part of the brain that controls vestibular functions.

They did no testing or suggest any remedy at this time.  It was a wait and see to determine if symptoms would subside.  I felt it in Gatsby's best interest, albeit it the most difficult decision, to let her go peacefully and not have something happen to her while alone.

We reviewed he MRI of the tumor from Dec 2013.  It took up 3 cm of the total 5 cm of the brain area.  They were absolutely amazed that she thrived until July 25.

I explained the "miracle" to them (diet and supplements), but they are "medicine".

I did donate Gatsby's body to science so they might learn more about her tumor and whether anything else was effected in her body.  Hopefully she can help another fur-friend in the future.

I want to thank you for all your guidance, support and love.  Gatsby thrived for a considerable amount of time past what was expected.  You truly were a God-send.

Thank you for the work and lives you better.