Meet pearl: the rescued miracle dog that rescued me 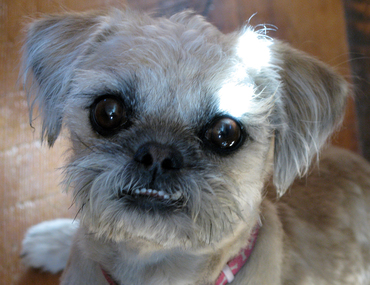 I accidentally adopted a dog. At least accidental is how I perceived it at the time.

But that was then and this is now.

Ultimately, I would be reminded once again that God always has a purpose in all things.

Meet Pearl:  The Rescued Miracle Dog that Rescued Me

here is an excerpt:

It’s Always Darkest Before the Dawn

Over the next few weeks Pearl’s health grew worse. What little food I could get down her just wouldn’t hold. Up it would come. She was losing weight at an alarming rate and she was beyond lethargic. A visit to the Veterinarian revealed that she had a heart murmur and her blood levels were critical. I was told she was in liver failure. I couldn’t believe it. I didn’t want to hear it. I was heartbroken and frustrated. The doctor informed me that there wasn’t much hope for her and that she would likely need an ultrasound and expensive liver shunt surgery (which I was told may or may not fix the problem) and that she would likely have to be on medication the rest of her life. I had no earthly idea what the heck liver shunt surgery was, but it didn’t sound good.

Spaying her at this point was completely out of the question. She was too sick to undergo anesthesia.

Pearl was too young to be this sick. It just couldn’t be. I was devastated by all the news.

I didn’t want to put Pearl through such a serious and life-threatening surgery only to have it not work. There had to be another way.

My husband suggested putting her down.

No, I snapped at my husband. You can’t mean that.

I thought it was a cruel thing for him to say, but he wasn’t being cruel, just practical and truthful.

He said, This is no quality of life for Pearl. She can’t keep food down and she’s chronically sick. You have to do something.

As much as I hated to admit it, he was right. I had to do something, so I earnestly prayed for wisdom.

God, what should I do? Help me! I don’t believe you brought this little one into our lives only to take her away.

On April 28th, one month after Pearl came to us, and after trying everything I knew to change the tide, I went to work researching the Vet’s recently diagnosed condition, looking for a miracle for Pearl.

I Googled “liver shunt surgery” which ultimately led me to the website you are on now.

Rick & Cindy claimed to help dogs with liver disease and other health issues and offered a free consultation. Being the skeptic that I am, I immediately thought: yeah, right, so what’s the catch? I began to read the countless reviews and testimonials on the website and I was impressed. Natural healing sounded good to me. I knew there had to be something positive about this find and so for the first time in a while, I finally had hope and I believe an answer to prayer.

That day I took Rick & Cindy up on their offer of a free consultation. Following is the message I sent to them:

Help! About a month ago, we adopted a Brussels Griffon female from a dog rescue. The foster parent that had her was feeding her eggs with Ham because she wouldn’t eat dog food. Since we have had her, we have been feeding her the expensive refrigerated kind of dog food– PetFresh Select. She does eat this eagerly, but throws it up. We have had two blood tests–both of them showing abnormal liver levels. We also just completed another test–the vet is going to suggest an ultrasound, biopsy and surgery. There has to be a better way. We are quite concerned about our little girl and don’t want to lose her. PLEASE CAN YOU HELP?

To my surprise, I received an immediate response with a questionnaire to complete, outlining Pearl’s health. I immediately completed it, and emailed Pearl’s health records. Two days later Rick called me (which was a delightful and unexpected surprise) and he suggested an immediate change in Pearl’s diet which he specifically designed for her based on my answers to the questionnaire. Rick talked me off the ledge and gave me hope that Pearl’s liver could regenerate and recover without the need for surgery or medication. Pearl’s new diet included puréed raw organic vegetables, significantly decreased animal protein, raw organic coconut water, organic raw coconut oil,  goat-milk yogurt, and raw fruits like apples and banana, plus nutritional supplements.

I followed Rick’s advice and instructions exactly. The results were instantaneous. It was an amazing turn around.

The diet she is on now is so much more fun than feeding inferior commercial dog food. Sure, it’s a little extra work, but she enjoys it so much and I have the peace of mind of knowing exactly what’s she’s eating because I prepare it myself. The Vet could have never done this for Pearl–expensive surgery and medication were completely unnecessary and Pearl is a living example of how a natural approach can make a huge difference in a dog’s health. I have learned much from Rick & Cindy as I went through this process. It’s been quite a journey and an education in proper nutrition for Pearl or any dog that may come into my care in the future.

Within just a couple of days of changing her diet, Pearl was no longer vomiting. Her energy level suddenly increased and she was eager to play with our other dog Lucy.

Below is a photograph of Pearl when she was very ill. She had never been groomed, and underneath all that fur was a sickly frame of skin and bone. 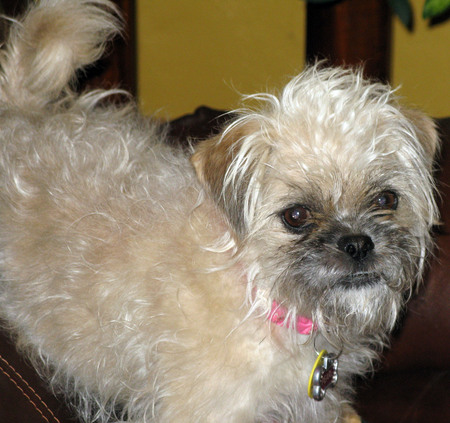 Below is a photograph of Pearl only a few weeks after feeding the special diet and supplements Rick designed for her. In the photo, she eagerly waits to be fed. As you can see, I also gave her a good grooming. She was all at once, a completely different dog. The relief I felt was indescribable. I was so grateful for the reversal. 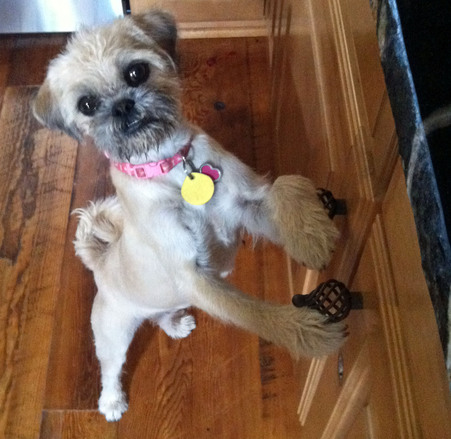 Rick did warn me that Pearl might go through further liver detoxification episodes and that there might be times when she could possibly get worse before she got better. And indeed there were a few of these episodes.

But here we are on December 1, 2014. Pearl has been with us for eight months now. It’s been seven months since I first contacted Rick & Cindy who were there for me every step of the way, and I am pleased to report that Pearl is doing very well. She was doing so well that we were finally able to have her spayed last month (November 2014).

Our Vet was stunned by the remarkable change. Pearl was less than nine pounds when she came to us. Today, she’s a chubby 15 pounds and we recently had to adjust her harness accordingly as her girth has significantly increased. She is now a well-adjusted little pooch who is also fully house-trained, I might add. She is the joy of my life (and my husband’s too); an affectionate little girl and so well-behaved.

I am so thankful for Rick & Cindy’s help, support, and dedication to Pearl and all the sick dogs and humans they have helped in the past and all those they will be sure to help in the future. If it had not been for Rick & Cindy, I really don’t know what I would have done.

Click here for the next Testimonial - Max the Presa Canario

Click here to return to the Testimonial home page
The statements in this page have not been evaluated by the Food and Drug Administration. These products are not intended to diagnose, treat, cure or prevent any disease.