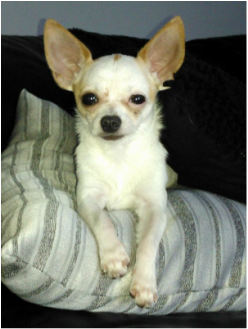 Dexter "before" when sick
Dexter the Chihuahua

Dexter was a happy, lovable little Chihuahua until mid-summer, 2014, when he had his first “episode”. He was acting like he was drunk – wobbly, weak, easily startled, walking in tight circles, unfocused and disoriented. We were terrified and immediately rushed him to the nearest vet which was an after-hours veterinary office. Dexter was kept overnight and when we went to pick him up the next day he was better, but far from 100%.

About a month later, he had another “episode”, so back we went to the after-hours veterinary office.  This time, they said Dexter would likely be more comfortable at home, and instructed us to monitor him closely for the next 24 to 48 hours. Similar to the previous episode, it took about 24 hours for him to be back to “normal”.

Approximately one week later, Dexter had yet another episode, and we knew we had to determine what, exactly, was wrong with Dexter a.s.a.p. We contacted our regular vet and he suggested a bile acid test for Dexter to determine if he may be suffering from a liver shunt. After going through the test, we were referred to animal specialists in a different city. Off we went to see the specialist, where an ultrasound was conducted. Although the test was inconclusive, the doctor advised us that it was very likely that Dexter had multiple, microscopic liver shunts, which were inoperable.

Dexter getting better
Refusing to give in to the diagnosis, we turned to the internet for more information. I must say that we were even more frightened after our initial scouring of the internet which didn’t give us much encouragement. In fact, the prognosis seemed futile after reading that most dogs diagnosed with a liver shunt live only 10 months to 2 years post-diagnosis. Dexter was only 2 years old at the time and Chihuahuas are supposed to live 15 years or more!!! Needless to say, we weren’t giving up on our little guy and vowed to do anything and everything in our power to keep him alive and get him healthy.

That’s when I found Rick and Cindy’s website and what a God-send they have been!!! Dexter has now been on Rick and Cindy’s recommended diet for close to 1.5 years and what a difference the diet has made! When we compare photos of Dexter before and after changing his diet the difference is staggering! He is now bright-eyed, extremely energetic, gaining weight, has a soft and shiny coat, and no longer has any staining under his eyes.

He did have another “episode” about 4 months after changing his diet, which was very upsetting in the moment, but Rick took our frantic call and calmed us down by explaining that Dexter was “detoxing” and, in spite of how frightening it was in the moment, it was a good thing - to be expected and a natural step in the progress Dexter was making. Thank you SO much, Rick, for your patience, compassion and guidance!!!  We never would have understood what was going on without you. 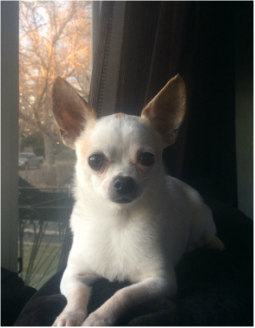 Dexter healthy today!
If your beloved dog has liver shunt issues, or poor liver health, please don’t despair. Contact Rick and Cindy for their diet/supplement recommendations and you, too, will see amazing, life-changing results! Dexter has been given a new lease on life thanks to Rick and Cindy!

We cannot begin to thank Rick and Cindy enough for their compassion and dedication to the health of dogs.

The statements in this page have not been evaluated by the Food and Drug Administration. These products are not intended to diagnose, treat, cure or prevent any disease.