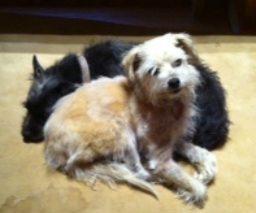 Kibble (white) & Gizmo (black)
Hopefully my story will help others lost in the confusion of information and save a puppy's life!

You guys are wonderful and Kibble and I are delighted to have found your website:

Kibble is a six pound Terrier mix who has a liver shunt that caused Hepatic Encephalopathy (link to Hepatic Encephalopathy page) with scary neurological symptoms.  She was in very bad shape and I was so frightened.  Kibble was actually misdiagnosed originally and we suffered through an expensive and unnecessary spinal tap procedure before a Bile Acid Test was finally done that showed abnormal levels and probable liver shunt.

Here is a video clip of how Kibble was acting before we knew what was causing her 'dementia' (click here for video). She would crawl into tiny spaces and just dig and press herself against everything. She could not lay down for more than a few seconds before getting back up and walking drunkenly and aimlessly, and lay down only to get back up again. She chewed cords in half and would walk herself into exhaustion then sleep for almost a whole day. This went in about 3 day cycles. She would get too much animal protein and it would start all over again. Also, here is a picture of her laying with our other dog Gizmo when her fur was very thin and dull and she was very lethargic. She was so fragile and worn down. It is such a feeling of helplessness to see your beloved pet this way and have no idea how to help her.

After finally getting a liver shunt diagnosis I changed her diet to another recommended low animal protein diet but Kibble continued to have seizures and other problems, and I did not like her being on the medications.  It didn’t seem like these would be good for her long term health.

I had an appointment to talk to a surgeon to get in depth details on her prognosis and options in 2 weeks when I found Rick & Cindy’s website doglivershunt.com. Trying a natural healing, nutritional approach made a lot of sense, but I was not sure which way to go... If another shunt grew it would be a huge problem. I was hoping that with a proper real food diet and whole food supplements that this would help Kibble’s liver get better and IF surgery occurred, another liver shunt would not be produced. I read tons of reports that went both ways for and against the surgery, and I was still not sure what to do........

I started making Rick & Cindy’s recommended diet changes the third week in May and started the recommended supplements the fourth week in May after I received them.  The instructions for the diet and the supplements were very specific and easy to follow, and I could email or call Rick & Cindy at any time with questions and concerns.  In fact, they strongly encouraged me to stay in touch so that they could help us.  We actually slowed down the supplement schedule due to Kibble being so sick, and I would not have known what to do without their help.

I met with a surgeon as planned after starting Rick & Cindy’s nutritional approach.  She said from the notes the radiologist gave the shunt was operable and there SHOULD be little risk in the procedure. I talked myself in and out of the surgery 100 times or more....finally opting for no surgery. 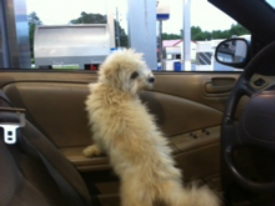 Kibble was just doing so well on her veggie/fruit/fish diet along with the whole food  supplements. She ate 3 times a day and was still taking the Lactulose  syrup and Metronidazole  antibiotic daily. She was back to her happy little yappy self and I could not stand the thought of her going through traumatic surgery when she was doing so well.  I was so happy she was yappy again, full of energy and waking me up by sitting on my stomach and yapping at full volume. I just prayed I was making the right decision.  I kept second guessing every decision I made...

With Rick & Cindy’s help I weaned Kibble off of her medications and she was med free by the end of June.  Now here are pictures of her doing her favorite thing - CAR RIDE! 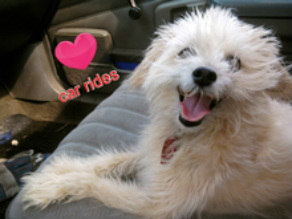 She's fluffy, yappy, and very happy. She LOVES fruit and her meat/veggie purée diet. We share apples and peaches and kiwi and bananas all the time.  See how much her coat and appearance have improved!  She is like a different dog! One more car ride picture (this is one month after starting her new diet and supplements!)... If that is not a happy puppy, I don't think I've ever seen one!

Thank you, Rick & Cindy, sooo much for all the info and concern you have given and continue to give for Kibble.  I was thinking Kibble’s problem was dementia or other possible brain issues as I knew nothing about Hepatic Encephalopathy. I don’t know what I would have done without you.  Your nutritional approach has saved Kibble’s life.  I hope that you are able to help many, many others.

Click here to return to the Testimonials page
The statements in this page have not been evaluated by the Food and Drug Administration. These products are not intended to diagnose, treat, cure or prevent any disease.