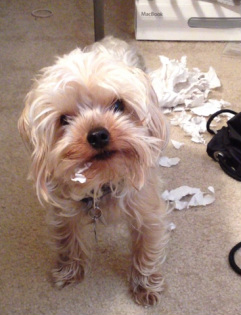 Marley is a Full Breed male Yorkshire Terrier, born with a 50/50 percent chance of living at birth as told by the Veterinarian.   Marley is 6.5 years old today and weighs 4.8 lbs, which last year he weighed in at 5 lbs. He started to lose his appetite, started vomitting frequently, and became very needy. On 12/26/12 I had him examined by a vet who recommended the same test he'd done last year plus a urine test. Last year his liver enzymes were a little high. But no action was taken, only additional testing recommended, such as neurological testing. Marley had never been on medication. But I felt his health was starting to be a concern to me.

When Marley was younger his testicles never dropped nor did his baby teeth ever fall. Thus he had surgery to have both removed at the same time. I had been doing a lot of reading to educate myself to see how I would be able to help him. At times I felt I got no questions answered at the vet, just expensive vet visits.  Marley also started having frightening seizures that really scared me.

Marley went in for further testing and his liver enzymes were still elevated and his Bile Acid Test came back with elevated bile acids. He was diagnosed wth possible HMVD or portosystemic shunt.  He was put on a number of medications including an antibiotic and an anti seizure med.  I just wanted Marley to be well.

After many attempts to get answers to Marley's condition with the standard  veterinary approach, all that I would get from the vet was no hope and more vet expenses. Every time he would leave from the vet within 24 hrs he would go into a seizure and be rushed back into the ER. They basically told me you can't be running him in every day.... Maybe you should think about putting him to sleep.  To me that was not an option before I tried all I could,  because I was his mother and could still see the life in him, which they couldn't or  wouldn't see. 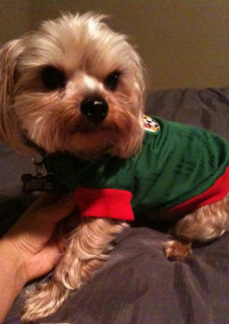 That is when I found your website.  Thank God I did.

Marley did not have a very good appetite when we started and was not eating very much.  Rick & Cindy really worked to help me with this and find foods that Marley would eat.  After about a month Marley was showing improvements.  He was gradually starting to show improvement in appetite, but still could be picky. I took him to the doctor and mentioned to the vet what I was doing with the new nutritional approach... She didn't really agree with what I was doing even though it was getting results and in so many words said she went to school for this and felt that she knew best!   She said there was a reason why she didn't put him on probiotics and said she wanted to flush things out with the antibiotics and not keep the bacteria in. She offered little hope, and just recommended more testing to find the root cause to see if the liver shunt could be surgically repaired.   Other than this she said continue to give him the medication. She also said I could try and ween him off the anti seizure medication to three times a day, then two but she said sometime that doesn't work.......

I didn't feel that the vet was much help at all.  And I felt that Marley was showing progress with the new nutritional approach, more progress than he had shown on the old standard approach.  No more seizures or signs of lethargic activity.   I was still following directions from the diet list you gave me.   Energy had risen.. Somedays better than others but Marley was looking much better than he was before....... 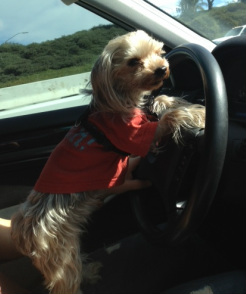 3 months later Marley is soooo much better.  I just wanted to say thank you very much for the guidance to help me to see and open my eyes to another form of healing through nutrition.  Marley has been seizure free since the last time we spoke back in January (for three months now). He has shown more energy and life as well.  I'm slowly weaning him off the anti seizure medication day by day. I'm so fortunate to have came across your assistance to bring Marley back to life instead of what the Dr's placed in my face as no hope and a recommendation to end his life ... Or telling me that your approach I was trying may not be the best for Marley. Boy, were they ever wrong!  I cannot thank you enough!!!!

Click here to return to the Testimonials page
The statements in this page have not been evaluated by the Food and Drug Administration. These products are not intended to diagnose, treat, cure or prevent any disease.