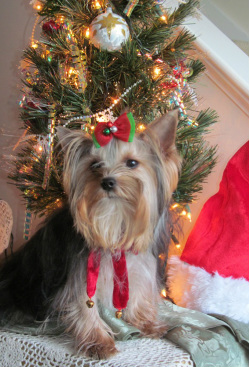 Reilly's first Christmas 2012
We Got Our Reilly Back !

Reilly is our 7 pound, one year old Yorkshire Terrier.  He came from a well known breeder.  Reilly is smart, loving, quick to learn, sensitive and full of energy.  His nick name quickly became Mighty Dog.

At first, we fed Reilly the commercial food recommended by his breeder.  At 5 months old, Reilly started sleeping a lot and taking long naps.  He had little energy and did not want to play and explore any more.  His urine became dark and had a strong odor.  He started having accidents at night.  When he was 7 months, I took him out to do his business as usual.  Reilly lifted his leg but was not able to urinate.  Desperately, he tried and tried but could not relieve himself.  I could not believe he was blocked at 7 months old!  From past experience with male cats and an older dog we once had, I knew this was an emergency.

Reilly’s life was in danger, and time was of the essence.  Immediately, I got in my car with Reilly and headed to the vet.  I called to let him know I was on my way.  Our vet placed a catheter in Reilly.  Tests showed that he had crystals in his urine caused by a high urine pH.  Eventually, stones could also develop.  Surgery would then be required.  Would I be able to save Reilly’s life next time?  How long could I afford these expenses?  Reilly was too young to have this problem.  I had to find the cause.

Desperately, I searched and searched the web.  I found a lot of conflicting information.  Instead, I needed facts, hope and the answer to Reilly’s problem.  I then found Rick and Cindy’s website.  Were these testimonials for real?  Free consultations?  I suddenly felt hope.  I called the toll free number and spoke with Rick.  He was sincere, caring and willing to help.  I was informed of the benefits of organic whole food nutrition and its healing ability.  Rick had given me a life preserver, yet I was not ready to climb on board.  After all, I knew more than the average person about organic nutrition.  I could now take care of Reilly.  A little knowledge can be dangerous, as I would soon realize.  I would advise you not to make the same mistake.  Your pet’s life is at stake.

I stopped feeding Reilly commercial food.  Instead, I made my own raw food diet, consisting of raw venison, raw egg, cranberries, probiotics, algae etc.  I monitored Reilly’s urine and adjusted everything as needed.  My diet appeared to be working well.  Or so I thought.............

Reilly was now 11 months old and we decided to have him neutered.  He did not handle the anesthesia very well at all,  but thankfully survived.  Later I found out this reaction was likely due to Reilly’s poor liver health.  Less than two weeks after surgery, he became blocked again.  Although he was not in distress yet, we had another emergency situation.  To our relief, an infection was the cause of the blockage this time.  The vet had again used a catheter and sent Reilly home with more antibiotics.

After two weeks, Reilly was not getting better.  The urine strips indicated a pH of 8, still way too high.  The protein in his urine was way too high.  The blood in his urine was off the charts.  Of course, my expenses were off the charts as well.  The vet gave me two options, more antibiotics or a full urinalysis.  A needle would be inserted directly into Reilly’s bladder to collect the urine sample.  This would be done without anesthesia.

I had finally had enough!  I made a complete U turn, and grabbed the life preserver Rick had thrown to me 6 months earlier, yet had not taken.  I finally knew we needed someone to train and coach us.  I made another desperate call to Rick and Cindy.  They became our coaches.  We strictly followed their proven nutritional advice.

To my complete surprise, in less than two weeks, urine tests showed Reilly’s pH and protein were normal, and there was no trace of blood.  The urine no longer had a strong smell.  Reilly was happy and full of energy again.  I couldn’t believe it.  Why had I wasted 6 months and countless dollars trying to fix these problems on my own?

One other thing we noticed:  Reilly used to have a dry hacking, wheezing cough which I think is common with Yorkies.  After about a month on the real food diet and whole food supplements we noticed that Reilly had stopped this completely.  I couldn't believe it.  One more chronic thing that went away with a better nutritional approach. 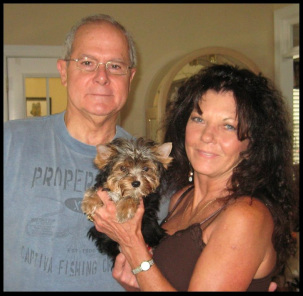 Reilly coming home Aug 2012
My dream for Reilly is now a reality, only because of Rick and Cindy’s proven organic nutritional approach.  Rick and Cindy’s dedication, knowledge and compassion are priceless.  They make this world a much nicer place to live in. I can only imagine what we would still be going through if I had not found them or we had continued to try to do things on our own. We are forever grateful.  We got our Reilly back!

Do you know why dogs give unfailing love?  What is dog spelled backwards?

Click here for the next Testimonial story -  Chopin's Story

Click here to return to the Testimonial home page
The statements in this page have not been evaluated by the Food and Drug Administration. These products are not intended to diagnose, treat, cure or prevent any disease.