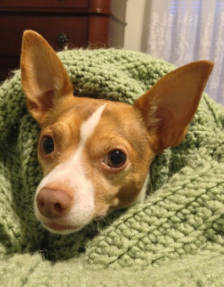 Let me start by saying that if you have found this website, you are in the right place. With Rick and Cindy's help we have witnessed our very sick, sweet Sissy girl return to the happy, healthy doggie she once was. Words can't express how thankful we are to have her back.


This is Sissy's story: 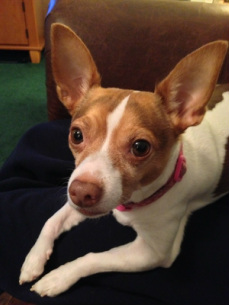 Our nightmare began over the Thanksgiving holiday in 2012. Our beloved  5 year old little girl Sissy, a chihuahua, jack russell, and min pin mix (yes, she is a mutt but please don't tell her this as she thinks she's a diva) became sick. She had been taking Denamarin for about a year because her liver enzymes had been elevated. (click to read about elevated liver enzymes) The vet explained that this medicine would make her liver "happy" and she didn't seem overly concerned so neither were we. She never showed any symptoms and appeared healthy right up until that Thanksgiving.

She began to shake uncontrollably and she just couldn't get comfortable no matter what we did for her. She would pace back and forth and we didn't know what to do to help her. She also began to have seizures. She would walk as if she was drunk and would fall over. Other times she would space out. Her eyes would be open but she would stare off and not look at us when we called her name.

We took her back to the vet and they did blood work and told us that her liver enzymes were elevated again.  The next morning we took her in for a Bile Acid Test which also came back with elevated numbers. (click to read about the Bile Acid Test) They told us that the next step was to do an ultrasound. They suspected she had something called liver shunt. She was already afraid of the vet and going this much sure didn't do any good for her phobia. We were nervous wrecks when she was at the vet for her ultrasound. This is when I began to research this thing called liver shunt that the vet was talking about.

Thankfully, I found Rick and Cindy's website. I spoke with Rick and told him about her test results and explained that she was getting the ultrasound as we spoke. He told me he was sure she had poor liver health based on the numbers and also told me what the vet was going to tell me before she even did! He told me that the ultrasound would come back inconclusive and the next step would be an MRI. This is exactly what the vet told me! We also had spinal taps, liver biopsies and traumatic surgery to look forward to. How could I put my sweet Sissy through all of this?

Rick also told me that we could improve Sissy's liver health by transitioning her to a whole food diet and whole food supplements. As he explained more it really did make sense. If Sissy's liver was compromised why would I want to continue to give her commercial dog food that is like a poison to her? I learned that the vaccines, heart worm medicine and flea and tick prevention were also putting a huge toll on her already sick liver. If I put all good things in her and quit giving her things that would make her liver sick she would have to get better! Right?

Well as much sense as it made I was not 100% convinced yet. I was still a little skeptical but something inside me told me to go forward with this organic holistic approach. I decided to try the whole food diet and supplements. 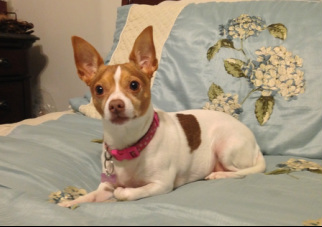 Rick walked me through every step of it. I knew I could call him with any questions (and believe me I did, a lot) and he was always so helpful. He told me what to expect as Sissy's body began to detoxify.

He also assured me that although the beginning stages of detoxification weren't always pleasant they were still good signs that she was ridding her body of toxins and it was a normal part of the process. Knowing what was going to happen beforehand really helped as we were going through this. Even though Rick lives clear across the country I felt like he was right beside us every step of the way.

I did call the vet to tell her that we had decided against the MRI and were going to try a more holistic approach. I wish I could say that she was supportive of our decision but that was not the case. She almost made me feel like I was making a horrible decision that would be detrimental to Sissy's health (boy was she wrong). I am so happy that we chose the natural healing approach instead of the traditional veterinary path. I wonder what the vet would think if she saw Sissy now? Sissy is now happy, healthy and full of spunk! She is my miracle and she is back to her old self! When she goes and gets her favorite toy and brings it to her Dad to play her favorite game, tug of war, I can't help but smile and be thankful that I found Rick and Cindy's website, went against "doctors orders" and decided to go with my "mothers intuition"!

Good luck to you as you begin your doggie's new healing lifestyle and love and licks from Sissy!

The statements in this page have not been evaluated by the Food and Drug Administration. These products are not intended to diagnose, treat, cure or prevent any disease.